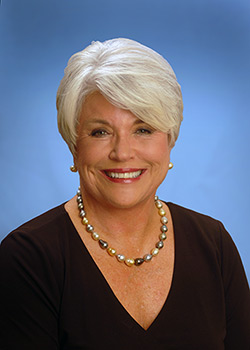 A native of Alpine, Texas, Beryl P.  (Berry) Crowley is proud of her Far West Texas roots.  She left Alpine to attend Mills College in Oakland, California, returned to Texas for law school, and has never looked back. She was second in her family to attend UT Law School, having been preceded by her paternal great grandfather Lafayette Hutchison who was a graduate of UT School of Law in 1888. She has been a resident of Austin since 1974, as well as from 1969-71 when she was in law school.

Berry has over forty-two years’ legal experience representing a broad range of clients and entities, with a career that has taken her in many different directions. Berry’s first twenty-two years in practice were spent in a law firm setting with a general office practice, first at a small firm in Brenham, Texas where she was the first female; then at Jackson Walker, formerly Small, Craig & Werkenthin  of Austin, TX , where she began in 1974 and was the first female, and where she stayed for 20 years.

While practicing law, Berry always took seriously her commitment to giving back to the legal community.  She participated and was very active in bar association activities.  She was President of the Washington County Bar Association in Brenham in 1973.  When she moved to Austin, she became active in the Austin Bar Association, the Austin Young Lawyers Association, the State Bar of Texas, and the Texas Young Lawyers’ Association.  She held leadership roles in all these groups, and is particularly proud to have been elected the first female president of the TYLA in 1983, being the first woman to hold a state-wide state bar elective office.  She served well as the first female on the Executive Committee of the State Bar Board of Directors, and was a Director of the State Bar Board of Directors, 1983-86.  During her award-winning term as President of the TYLA, she married Austin lawyer Mike Crowley and they blended their families, with Berry bringing three girls to the family and Mike bringing the oldest daughter and the youngest, a son.  Mike was a partner in an Austin law firm, and they and their family were very busy with work and school and all that life entailed. She participated in various community activities, as well as Austin forums, such as Leadership Austin.  She was a Commissioner to her local Fire District, and was an active member of her Homeowner’s Association, as well as serving as a Trustee on the board of the private high school her children attended.

In 1994, she took a step back and redirected her career.  She retired from her law firm, and became Executive Director of the Texas Center for Legal Ethics and Professionalism.  She continued her involvement in the bar associations, including the American Bar Association, where she was a State Bar and then Austin Bar representative to the House of Delegates, and a Council member of the ABA TIPS Section.  Her husband Mike Crowley died in 2000, and shortly thereafter Berry was diagnosed with Cancer for a third time—again, she beat it and continued on.  She took the Center for Legal Ethics to new heights, and became very active in Austin activities.  She was proud to be admitted to the US Supreme Court in 2002.

In 2006, again redirecting her career, she retired from the Texas Center for Legal Ethics and started her law firm of one:  Beryl P. Crowley, Attorney & Counselor at Law, and also began learning the intricacies of Legal Recruiting, first at a national Legal Recruiting Company (Major, Lindsey & Africa), and since 2011, her own company, Crowley Legal Recruiting LLC.

Her legal services continue under the auspices of Beryl P. Crowley Attorney & Counselor at Law, where she concentrates on Real Estate Legal Services and Legal Ethics related matters.

The entire time Berry was in a law firm setting, she concentrated on all aspects of real estate law, including buying, selling, title matters, transactional matters, commercial lending, corporate transactions, all aspects of lending and development, and business related matters.  While there, she edited practice based newsletters, represented individual, corporate and lender and developer clients, and was well versed in all aspects of real estate law. She was active in the local (Austin) and state (State Bar of Texas) professional development and continuing legal education groups.  She was a speaker as well as author and participant in seminars, both locally and across the state. She is experienced in the areas of real estate acquisitions and sales; real estate title curative work; complex commercial leasing for both landlords and tenants; complex real estate and personal property finance from both the borrower’s and lender’s perspectives; real estate construction contracts and lending; and commercial loan work outs, foreclosures and restructuring.   She is experienced in ranch buying and selling, build to suit and multi-use purchase and development; condominium establishment, and anything related to transactional real estate in Texas.

As Executive Director of the TCLEP from 1994-2006, she assisted and directed in its growth to the premier organization of its kind in the country. She created and developed innovative legal ethics and professionalism programs, including one adopted by the Texas Supreme Court as a training requirement for all newly licensed Texas lawyers, as well as being responsible for the innovative Ethics Jeopardy CLE program. She became well-versed and well-respected in all aspects of legal ethics, practice management, legal ethics consulting, malpractice and grievance prevention, risk mitigation and management, and tailored ethics CLE for lawyers and staff.

As a “legal ethics guru” Berry was experienced working with judges and courts throughout the state, including working directly with the Supreme Court on several initiatives, and was a popular and highly rated speaker at many continuing legal education seminars, author and lecturer, having written numerous articles for legal periodicals and journals, and is the editor of two books on ethics and professionalism topics, A Guide to the Basics of Law Practice Texas Center for Legal Ethics and Professionalism, 1995- 2004, and The Ethics Course, Texas Center for Legal Ethics and Professionalism.

She spoke to groups all over the country, including advising the Supreme Courts of both Utah and Oklahoma on their states’ legal ethics/professionalism initiatives. She lectured extensively.  She was the founder and chairman for 5 years of the State Bar of Texas Professionalism Committee, where she held a conclave of the deans of the state’s law schools in 1995 to discuss various ways the state could establish an Internship program for the state’s new lawyers (this was not to be).  She collated and published all the Ethics Opinions in loose-leaf book form, before then getting those Opinions and the Rules of Disciplinary Procedure and Disciplinary Rules of conduct on the internet.  She was an early adapter of online learning, and in the early 00’s was putting the Center’s continuing education programs online.  Berry’s familiarity with these resources and her expertise and practical knowledge of best practices ensure a high level of practice compliance for clients and save crucial time researching and analyzing complex ethics issues. Ms. Crowley concentrates on legal ethics consulting acting as “outside ethics counsel” to both firms that have their own ethics counsel and to individual lawyers and firms that require outside expertise in legal ethics compliance. As a Legal Ethics consultant, she knows that Texas lawyers confront a myriad of legal ethics issues in their daily practices.  Berry is available to consult with other lawyers and non-lawyers on these matters and help them sort through the myriad of problems to find a practical and ethical solution.

She was Managing Director for Major Lindsey & Africa LLC in Texas from November 2006-March 2011.  While there she learned the ins and outs of the profession.  She has been very successful at partner and associate placement in Texas firms, and currently recruits and places lawyers and legal professionals in law firms and corporations in Texas under her own firm, Crowley Legal Recruiting LLC.  She has worked with lawyers and major law firms in all major Texas cities, and is familiar with the market for lawyers and marketability of lawyers.  She communicates regularly with the persons in charge of hiring at the firms, and knows her market well.  She actively monitors the needs of Texas law firms, and works with lawyer candidates from a variety of legal fields.

Berry has become a natural leader, and her more recent community non-profit work has included service in leadership roles on the boards of several, and as Chairman of the Texas Advocacy Project (2005-2007); KLRU (Chairman of the Board 2011-2013), and ZACH (Executive Committee 2007-8; 2011-12).  She served on the board of GENaustin.  She is active in her community and participates in many educational initiatives such as Friends of the LBJ Library.  She has been recognized by professional awards and commendations for her leadership skills and dedication to her profession.  Because of her knowledge of the Austin business community as well as her large network of professional friends and acquaintances, Berry is sought after as a consultant to Alternative Legal Solutions providers, as well as Financial Service providers, both of whom value Berry for her intimate knowledge of the legal profession.

Her 42-year career has encompassed a broad and deep range of professional values and experience.  She has excelled and been publicly recognized in Austin and in Texas for her leadership abilities.  She is a powerful advocate and exemplar, as well as a leader where she has experience as a Partner, Shareholder, Chairman, President, Trustee, Director and Executive Director, Mentor, and  consultant  (all in addition to the most important roles of mother and grandmother; her “grandma” name is Grandberry to her eight grandchildren!!).  She has been recognized by professional awards and commendations for her leadership skills and dedication to her profession.  All in all, she loves her professional life!